I have had my cnc (computer numerical control) for a few year, but so far, the wedding gifts are my favorite to make!  Its always hard to find a good gift to give someone on their big day, unless they have a website that just tells you what to buy!

These custom made bottle openers are made of solid hardwood that is all indigenous to Pennsylvania.  All the font, design, and detail can be customized to fit your gift perfectly!

Here are just a few styles and designs that are available.

In addition to the engraved fronts, we also offer the option to write them a note on that back that will be engraved with your handwriting! Just write a personal note, scan or take a photo of it, and send it to us! The back also has a keyhole so it is easy for anyone to hang on the wall.

Here is what a personal note may look like.

Depending on your design, species of wood, and finishes, these beautiful pieces start out at $65 plus shipping. contact us at Twinorchardswoodworking@gmail.com to get started on your own project today!

As my business has picked up I started looking into CNC routers (computer numerical control) to aid in some of the finer engraving and intricate cuts.  After a lot of deliberation (read discussions with my wife) I went with the Shapeoko XXL kit coupled with Carbide Create and Carbide Control software.  At ~$1800 with a 33″x33″ cutting area it had the most bang for your buck; anything larger would have jacked the price up by several thousand.

Set-up was a breeze…just kidding.  It took a bit of trial and error to set everything up CORRECTLY and finally get it running.  Learning the software was a little easier and I was able to use it on a batch of engraved swimming awards for the Perk Valley HS men’s team.  My old HS coach had just finished the season as men’s runner up at the PIAA District 1 AA districts; quite the culmination after building up his team over several years.

I’ve been working on a lot of different types of projects with the CNC and really getting the feel for what this machine is capable of.  After my friend’s cat passed away I created a design for a wooden urn for his pet’s remains.  The CNC was able to cut the entire box from one piece of hardwood.  I designed a second program to engrave the name ‘Dude’ and a cat outline into the lid.  Dude was quite a cat and I know this will be a treasured way to honor him.

Sadly, a family friend had to put down his sweet dog Max after over 12 years together.  This dog had been with them through all their ups and downs and was a wonderful buddy.  I utilized a piece of oak that they had given to me for another project and designed a name sign for Max, the collie.  He spent a lot of this past winter happily laying outside (all that fur is a good insulator) and hopefully this name plaque will mark his spot outdoors. 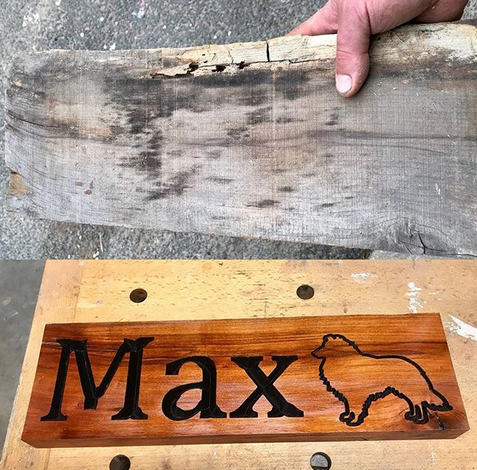 This project was a 3-generation project; a standalone waste cabinet for my parents’ home.  Naturally, my father wanted to work on this with me and if I’m in the woodshop you can be sure my twins will be there too!

We designed this cabinet to hold two waste containers and would easily slide open and close as shown above. 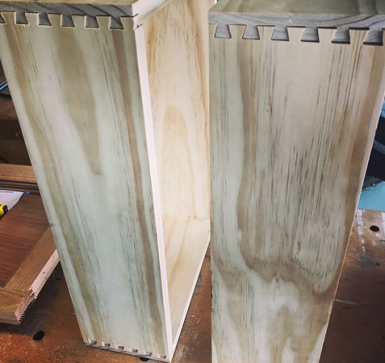 After building the base cabinet I dovetailed the sliding drawers and dry fitted to ensure a smooth fit. 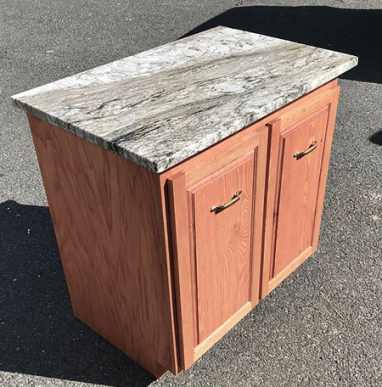 As always one of my boys was sure to check all the final dimensions; notice the woodshop PPE – all about safety for the little ones.  Hardware and a granite top finished the piece beautifully. 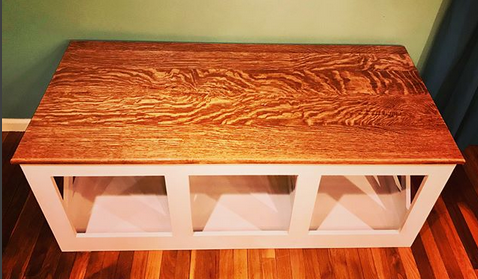 One of my previous clients, Kelly C., requested a custom bench to fit/hide away 3 dog crates.  After scouring online everything she found was either too big, too small or overpriced!  I had previously made custom shelves for an alcove area in her home and was excited to work on another project with her.

After finalizing dimensions and style (X bracing to match their dining room chairs) I provided a 3-D rendering for her to review.

The bench base was constructed from plywood (to be painted) and the top was made from jointed quarter-sawn oak. 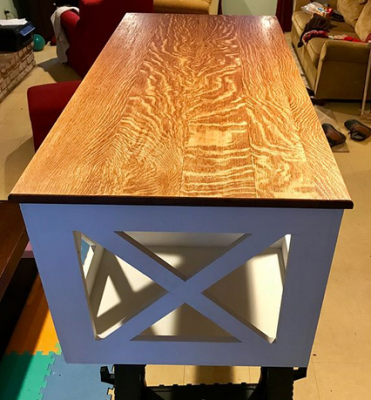 After painting and poly the final test was setting the pet crates in each cubby; a perfect fit all the crate doors opened smoothly!  I love the clean look of this project and it’s multiple uses; hideaway pet crates and a bench for additional seating at family gatherings.  Another great piece for their home.

Earlier this year my good friend Peter Urscheler was sworn in as the new mayor of Phoenixville.  He is a genuine, caring, philanthropic, motivated and overall good hearted person; attributes I’m sure he would say derived from his incredible parents Norma and Emil.

Peter is always giving his all for others and his community, so I wanted to show my appreciation for his hard work.  I design and crafted a walnut desk plaque with pen holders for him; honoring his new title.

My sons and I visited Peter at his office to drop off the plaque and we were treated to a tour and met some of the wonderful police officers.  Everyone was very welcoming and even let the boys sit in the cop cars; they were thrilled! 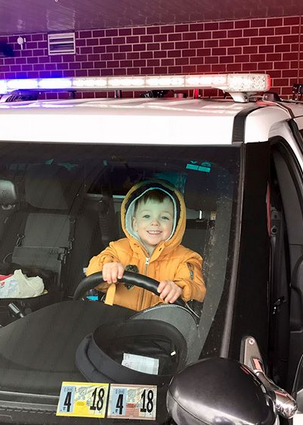 We are truly blessed to live in such a wonderful area and community. Thank you to our hard working police force and Peter for bringing so much joy to my boys today!

My wife’s college roommate and husband recently made the trek from a little apartment in NYC to their first house in Houston!  In their current Manhattan apartment there’s only room for an island/table, so when they found their new home in Houston they contacted me to build a dining room table and kitchen table.  A table can really anchor the room and provide a space to gather with friends and family.

As with all my projects, we first start out with 3D computer models so we can all see what the project will look like; shown below.

Once the style and design were finalized I chose some beautifully, locally sourced hardwoods to construct both tables.  I get all my material from a mill  just 15 miles down the road from me so everything all needs to be jointed, planed to appropriate thickness, and cut to size.  I love using hardwoods that are native to PA; they have gorgeous grain and interesting features.  That’s why I never source my lumber a big box store.

The base of the trestle table was first. I Constructed it out of poplar; a hardwood that takes paint very well. 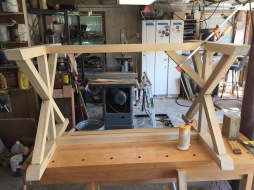 Here is the bench top with breadboard ends; a great finished look and it also helps prevent the long boards from bowing over time.  A coat of poly really helps the grain of the walnut bench POP. 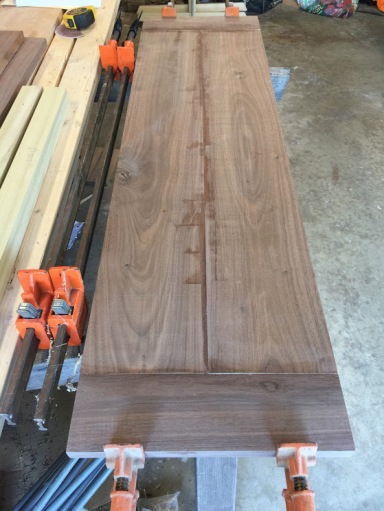 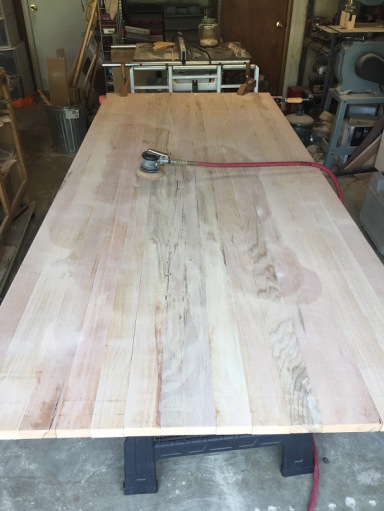 The Rustic table came together well. I utilized machine screws and anchors to allow it to be easily moved; the top was quite heavy!  After the sample stain was approved and applied I finished the piece by sealing with poly.  Both tables arrived in Houston and quickly became a place to congregate, chat and host dinners.

3D renderings are one of the best tools a woodworker can have. It not only helps you, the client, envision the final product, but it also helps me plan everything out before I go to the saw mill.

With this powerful tool, we can make sure we are on the same page with your custom project better then a 2D sketch with paper and pencil. With everything being exact to scale, we can upload different items to see how your project would fit in your home!

Email me today for your free proposal on your next custom piece.

My father, Tim, is a first-generation American; both of his parents emmigrated from Ireland when they were teenagers.  My grandfather, Frank, started his career as an apprentice carpenter in Ireland at age 14 and came to the US two years later.  The Robinson family settled in the Philadelphia suburbs.  When Frank and my grandmother, Mary Gerrighty, settled down on a 75 acre farm in the Malvern area they were sure to teach their 6 children about the value of hard work and quality of work.

Years later, after his parent’s had divorced, my father traveled to Florida to live with Frank and quickly started his own career in carpentry at the ripe ‘old age’ of 13. My father started out building new homes and then went on do commercial construction buildings in center city Philadelphia; retiring after 32 years as a union carpenter.

My parents well understood the risks and hardships that can come with a career in commercial construction and carpentry and they encouraged me to pursue a college degree.  After completing 2 years at West Chester University (and making the National Team in Swimming) I realized that this wasn’t the path for me.  I attended carpentry trade school for 4 years, while completing my apprenticeship, and graduated as a Journeyman in May of 2012.  During this time I was able to work side-by-side with my father as he finished the last few years of his career and learned a great deal from him including my love of numbers and carpentry layout.

During my 7 years in commercial construction I had married and became a father to twin boys.  Until this time the risks of my profession had never weighed too heavy on my mind.  However, after a fatality and near fatal accident at my job site I began to seriously reconsider a career in high rise construction.   With the impending cost of child care x 2 and my desire to continue working in carpentry I decided to start my own woodworking company.  Initially, it was difficult to change gears from a busy career in construction to full time dad and business owner.  But as the boys have grown, along with my business, I’ve really enjoyed watching them learn new things and learn new woodworking skills myself.  Taking on new projects, like farmhouse tables and live edge shelving, is a fun challenge and I look forward to furthering my business.

Perhaps there will be a few 4th generation carpenters as well…

Earlier this year the Berry family requested a custom designed kitchen coffee cart for their home.  They provided the dimensions to ensure that it would fit perfectly into their desired space. 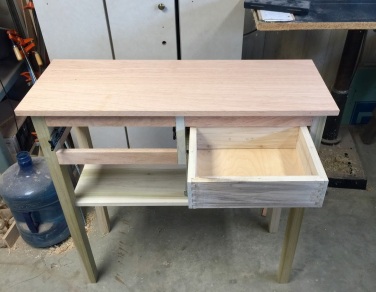 I designed a 3′ wide x 3′ high x 13″ deep structure out of poplar and red oak.  The Berry’s wanted a painted and distressed base with a stained and poly’d top.  I used poplar for the base as it is a lighter weight hardwood, accepts paint easily and lends itself well to being distressed.   The top is constructed of solid red oak, which has nice grain that will pop when it is stained.

There is plenty of storage with the ladder and solid shelves and 2 drawers. The shelves and legs are joined by mortise and tenon joinery; it is a simple and strong design that has been used by woodworkers for thousands of years.  It was even used in the construction of Stonehenge.

I framed the drawers with poplar strips to add dimension to the drawer fronts.  Here you can see the aged brass drawer pulls chosen by designer Jessica Salomone. 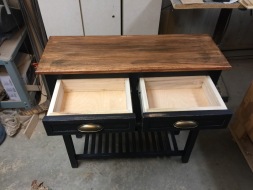 The finished product fits perfectly in this space in the Berry’s home – one of the perks of designing a custom piece for your home! (photo by Jessica Salomone).  This project utilized a variety of finishing techniques to create this beautiful ‘distressed’ and ‘aged’ kitchen/coffee cart and I look forward to creating other distressed pieces.  Please let me know if this peaks your interest and you’d like a unique cart or table for your home.